TAO floats are FULL SERVICE; all amenities are provided.

Watch this video about floating at Tao.

A great article about FLOATING AT TAO.
Keep in mind each experience is uniquely different every time!

Reduce sensory input and just float away into deep relaxation semi-submerged in warm supersaturated salt water embraced by the floatation tank. After about 30-40 minutes is when the body & brain connection magic starts to happen; your brain starts to create Theta brain waves, a frequency that allows you to enter your most creative state, free of stress and anxiety. The last 20minutes of your float will be just bliss!

up to 90min
A 90min float is IDEAL. However “doing nothing” is surprisingly harder than it sounds. Enjoying the full benefits of floating can take some practice. Most people take 20-30 minutes to get to a place where they can calm their thoughts and mind and just get settled and accustomed to the new environment of the tank. However, after 20-30mins your thoughts of what you are having for dinner, deadlines on projects or assignments, relationship problems, your own ego will start to fade so you can begin to fully relax. 90mins is like our natural sleep cycle, so once you become experienced at floating you can get in and fully rest. Coming out of the pod you will feel as refreshed as after a full night’s sleep.

up to 120min
For those experienced in sensory deprivation and floatation therapy, now 60 and 90mins never feels long enough. Opt for the 120min session to allow yourself that extra space and time to unravel rest and relax.

SERIES of FLOATS available at a $22 savings per float!

WHAT IS FLOATATION THERAPY and SENSORY DEPRIVATION

Floating or R.E.S.T: Restricted Environmental Stimulation Therapy (REST) is relaxing in a pool of super buoyant saltwater (approximately 1000 pounds of Epsom salt and 300 gallons of water) that allows you to just float effortlessly while you receive the benefits of a “zero gravity” weightlessness experience.

Floating in the float tank allows for reduced sensory input to the central nervous system. Floating enables you to quickly enter the “rest & digest” parasympathetic nervous system versus our “daily grind” of the “fight or flight” response.

Research has found that profound deep relaxation and improved thinking are achieved while floating as outside stimuli are reduced. Dr. John C. Lilly, a neuroscientist, and pioneer in brain and behavioral research studies found that gravitational force on the body coupled with noise, light, and temperature variance, etc., utilized approximately 90% of the neural activity in the brain. Removal of the gravitational force and the five senses while floating will “free up” space and decrease the constant continual brain processes. Kinda like “fasting” for your central nervous system. While in the floatation tank, short-term sensory reduction can result in incredibly profound states of relaxation, expanded healing, creativity enhancement, problem-solving, meditation, accelerated learning, sports performance conditioning, and self-awareness.

Completely suspended, similar to zero gravity, floating in serene warm salt waters, total muscle relaxation is achievable. This promotes a sense of health and well-being that can remain for several days, at a minimum, and certainly long beyond.

Altered States is commonly mentioned when we start talking about floating…difference is you are only semi-submerged in water and a slim to no chance turning into proto-human monkeys.

Do I need to bring anything?

Just bring yourself. We do recommend ear plugs for increased sound buffering as well as to keep salt out of your ears. You receive one complimentary pair of ear plugs designed to block out sound and water, you can bring your own or buy additional pairs from us. Our float experience is full service; we provide towels and toiletries for bathing before and after floating. Certainly feel free to bring your personal amenities for your comfort.

Can I drown if I fall asleep?

No. Some people fall asleep, but the water is so buoyant you stay afloat. The worst that can happen is getting woken up by a bit of salt water in yours eyes. We provide a fresh water bottle inside the tank for spraying off your hands should you need to touch your face once your hands are covered with salt. It is recommended to NOT TOUCH YOUR FACE.

How is the tank kept clean?

The salt solution you are floating in is a naturally highly sterile environment; however all the water is triple filtered and sanitized with UV light with the addition of hydrogen peroxide between each float.

I just dyed my hair, how long do I have to wait to float?

For brighter and more pigmented shades like red, purple, blue, green or pink it might be several weeks. Our guideline is that you must wait until the water runs clear and dye does not come off in the shower or when you towel dry it – which might be 7-10days. This will also ensure the chemical applied to the scalp has allowed hair follicle and shaft to close, hence retaining as much dye as possible. Wetting your scalp thoroughly in the shower required prior to the float will also help with less absorption of hydrogen peroxide and salt from the water that strips color from hair. Bathing cap is available for use.

Will my hair get wet?

Yes, your whole body will be wet. You are required to shower just before and after your float. Showering helps to keep our tank clean by removal of all hair products and body oils/products. Once in the float tank you lay down and your body floats like a cork on water, just semi-submerged. If you prefer to not get your hair wet you may bring and wear a bathing cap. Floating is not recommended within 48hours of any scalp or  hair treatment; hair dye, straightening, etc.

What if I’m claustrophobic? Do I have to close the door? Can I open the door?

People with claustrophobia consistently report no problems with floating.
You’re always in control of your environment, the tank is 8 feet long and approx 5 feet wide and once you close the door it is so dark inside you won’t even know there is a top over you.
Feel free to float with the door open, semi propped open or closed.
You can choose to have a floatation therapy experience or more of a sensory deprivation experience. You’ll know what is best for you and when you are ready to move from one to the other. There is not right or wrong way to float.

What about floating while menstruating?

You can float while menstruating. Just prepare yourself as you would for any other water based activity

Can two people float at the same time?

Floating is a personal experience and the tank fits one person at a time. Tao features ONE float tank that is the Oasis Relaxation System allowing for one float, one person, at a time.

Without the need to fight gravity or take-in external information, you’ll likely experience the most complete relaxation you’ve ever felt.

SPIRIT
With external stimuli removed or reduced what we experience in the tank comes from within. You may experience answers to questions coming more quickly and ideas and personal insights abound.
This deep solitude is also thought of as training wheels for MEDITATION.
After about 30-45min of floating, your mind starts producing Theta brainwaves, which are responsible for that ’between waking and sleeping’ state. After years of practice, people can enter Theta state through deep meditation. Float tanks get you there effortlessly

MIND
With nothing to distract you, your level of concentration and knowledge absorption is astonishing.
It has been reported that people have cut strokes off their golf game, developed complex scientific theories, and drafted whole portions of books while floating.

Similar to “WHY FLOAT” athletes gain physical and mental benefits from floating.

FAMOUS FLOATERS: Floatation therapy as been used by pro sports teams and athletes for the past 30 years, most notably:

Float tanks are renowned for their innate ability to rapidly relax an individual. Research has indicated that floatation therapy provides a healing state for many conditions such as:

Examining physical issues: Pain and swelling are common among all athletes who train vigorously on a daily basis. Floating will help reduce swelling in joints and ligaments (knees, ankles, hips, back, shoulders) by removing any, and all, pressures from this portion of one’s body. When you float your body is essentially weightless inside, thanks to the thousands of pounds of Epson Salts that are dissolved in the water. This removes any pressures and weight that you would normally feel while resting on the couch or napping in a bed.  Your body will float atop the water like cork on water.

Metal awareness issues. In the 24 hours leading up to a competitive events and athletes may experience stress, anxiety, exhaustion and jet lag. the inability to properly focus or get a good night’s sleep will hinder your performance.  A float just 24 hours prior to your event will allow you to take an internal inventory of every element that you need to focus on. Floating allows you to specifically dedicate time to training your mind and consciously dedicating time to rest. Mentally identifying your own areas of weakness is of huge importance in athletic growth.

Specialty populations and current conditions that benefit from regular floating: 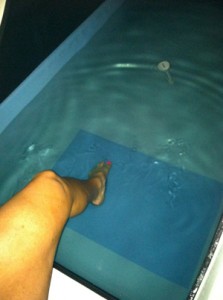 Once you arrive at check-in we’ll cover the basics and answer your questions. A TAO wellness assistant will facilitate your FLOAT by walking you through what to do and how to prepare for floating. They will answer all your questions prior to leaving the room so you may get ready for your float comfortably.

PRIOR to arrival, we recommended that you:

An in-room shower is provided with amenities so you may cleanse the body of oils/moisturizers and conditioner and make-up prior to your float. Earplugs are provided for your first float. Consider bringing your own bathing cap (a bathing cap is optional).

Book your FLOAT floatation therapy experience online or contact us!